Note : This event was covered by our author Arun Kurien

The first thing that I was impressed at the Great Grover Wine Festival which was held at Bhartiya City, Bangalore was the amazing venue that was decorated with lights. It looked stunning in the night with lights of different colours. I must say getting to the venue took me little long because I wasn't familiar with that part of the town. 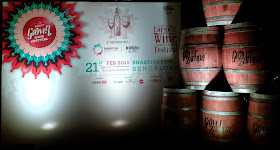 As I walked to the venue through the well maintained garden and the clean roads I came across a lot    barrels at the entrance and ofcourse I coudn't resist taking a picture of that. Then as I entered I found a flea market selling awesome quirky stuff and it happened that all were my favourite products. So I quickly grabbed a Brownie and went ahead to see what was in store for the rest of the evening.
Another thing that grabbed my attention was how the barrels were placed in different corners and had a glass filled with wine on top of it. This was basically meant for people to taste it.

I came across this huge place where I found a lot of people surrounding it and taking a lot of pictures, so I went ahead and found that they were grape stomping. It was so cool, I wanted to try it out but my new trousers refrained me in doing so. Anyways, it was awesome to see so many of them having a good time,I am sure it was as exciting as what one could think of.

Then moving ahead I got to taste the finest wine available in this part of our country, There wes Karishma Grover from the Grover Vineyard who was explaining about the different types of wine and the differencesbetween the red wine, white wine,Champagne and so on. Oh not to forget how they explained the wine pairing which I felt was so awesome. I am definitely going to try the wine pairing soon.

As the evening passed by, it was time for some music,fun and entertainment. The crowd kept increasing as every minute passed by. Most of them were on the dance floor and having a great time. The bands that played were electifying and had the entire crowd groove to their tunes. Swaratma at the end were the perfect finale performance onc could have probably asked for. The corwd went crazy seeing them perfornacne that the lead singer jumped into the crowd and started to groove with them as well. When Swaratma were done with their performance the crowd started to chant,'Once More'. Continuously that they had to sing few lines before they signed off.

It was an awesome experience and felt amazing to have made it to South India's largest wine festival. It is one of those events where at the end of it, you will have a good feeling while walking out.
Share